< Back to Figurative & Genre

A Bather, Silver Beach was painted in 1918, and is a wonderful example of the artist’s mature style in which he had been working for several years and in which he commanded with great confidence. Executed in a palette of pastel blues, greens, and beiges, A Bather, Silver Beach communicates a calmness that Hassam sought after the bustle of the city and the tensions inspired by war, in this instance at Silver Beach, a community located on the banks of the East River in the Bronx neighborhood of Throgs Neck. His clear brushstrokes describe the energy of the object that they are depicting, a technique that he adopted from the Symbolists. Blue and white brushstrokes depicting water modulate horizontally across the canvas, the green brushstrokes reach to the top of the picture to reflect the blades of grass growing towards to the sun, and the layered brushstrokes of the nude woman wrap around her body and hair, infusing her figure with a living warmth. The subject reflects his continued adherence to Impressionist principles; Hassam voyeuristically captures his bather in a private, introspective moment characteristic of Degas’ (1834—1917) bathers, but employs a palette and outdoor environment in the spirit of Renoir’s (1841—1919) depictions of the same subject. Despite his loose brushwork, however, Hassam’s bather emanates a strong feeling of solidity within her environment, a situation that has led scholars to argue that the distinctions between Impressionism and Realism is not as defined in American art as it is in European art. A Bather, Silver Beach demonstrates the mastery Hassam exercised over his craft, a tour de force of expression communicated through a simple palette, minimal subject matter, and boldly descriptive brushwork. This painting is slated to be included in forthcoming catalogue raisonné of Hassam’s work by Stuart P. Feld and Katherine M. Burnside. 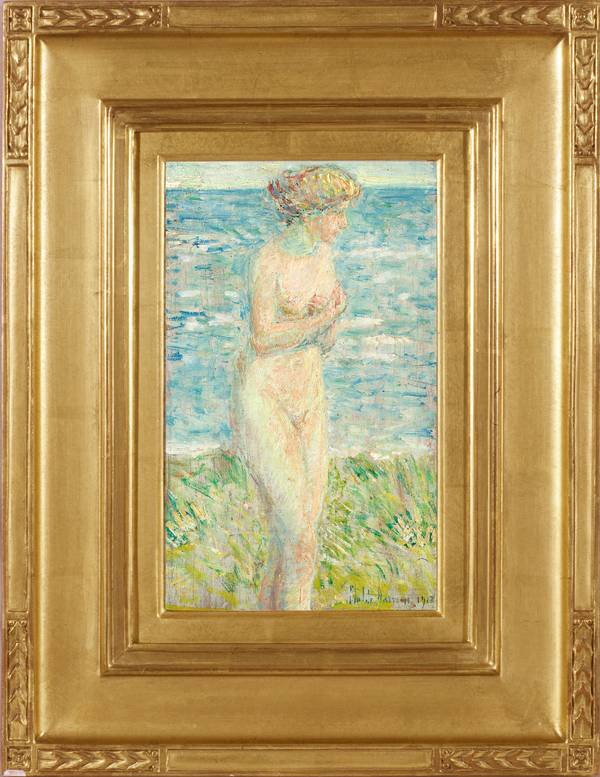 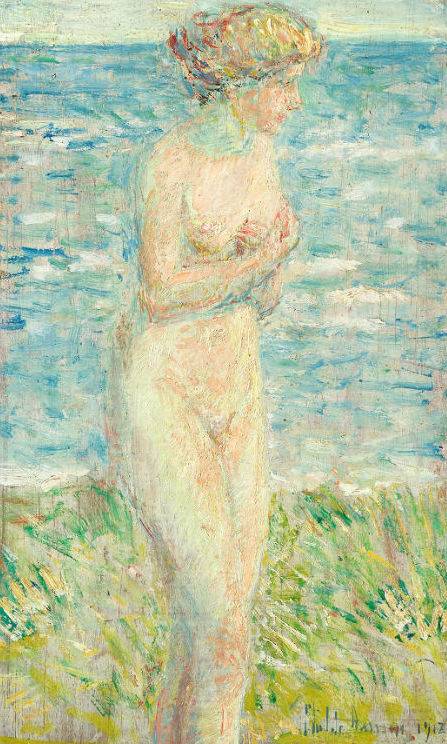