Apple Perfume was painted in 1911, one year after Curran and his family had established their permanent summer home. His choice in subject—a child, likely his daughter Emily, who was a favorite recurring subject and who would have been about seven at the time—is an endearing representation of the feminine archetype that Curran frequently sought to convey in his work. Her childlike beauty and radiance is readily apparent, accentuated by the luminous, dappled sunlight breaking through the leaves. Rendered with fine brushstrokes and executed with a bright palette of summery hues, one can almost feel the coolness of the shade or smell the sweetness of the leafy enclosure. With her back turned to the viewer, the girl is absorbed in the simple pleasure of a fresh-picked, fragrant apple; she is the epitome of childhood innocence. On a broader level, Apple Perfume also belongs to the tradition of the painted apple in 19th and early 20th century American painting. The apple itself had, by the early 1800s, become a staple of the American diet and a source of pride for the American people. Apples and children went hand-in-hand, as sayings such as, “children love an apple more than gold,” and, “as sure as God made little apples,” became common. Beginning in the mid-19th century, the pervasive and iconic American apple trees, their blossoms, and the fruits themselves, had found new significance as the subject of many still lifes and genre scenes. Worthington Whittredge, Levi Wells Prentice, De Scott Evans, Winslow Homer and Eastman Johnson were only a few in an extensive history of American painters who immortalized the humble fruit. Curran is no exception to this tradition, though his style and treatment of the scene sets him apart from convention. While one can clearly see the influence of the Impressionists in Curran's treatment of light and his plein-air technique, his mastery of the human figure and careful rendering of the scene are unique; his pursuit was one of an ideal, feminine beauty, which he executed through careful compositions enhanced by diffuse light and crafted with an exacting hand. Few other painters at the turn of the twentieth century have approached this level of coalescence between technical skill and symbolic unity, and even fewer have done so with such conviction. 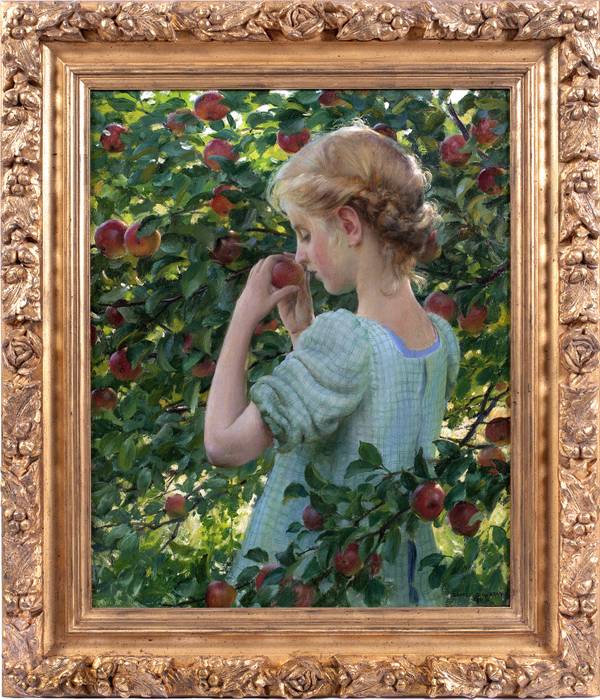 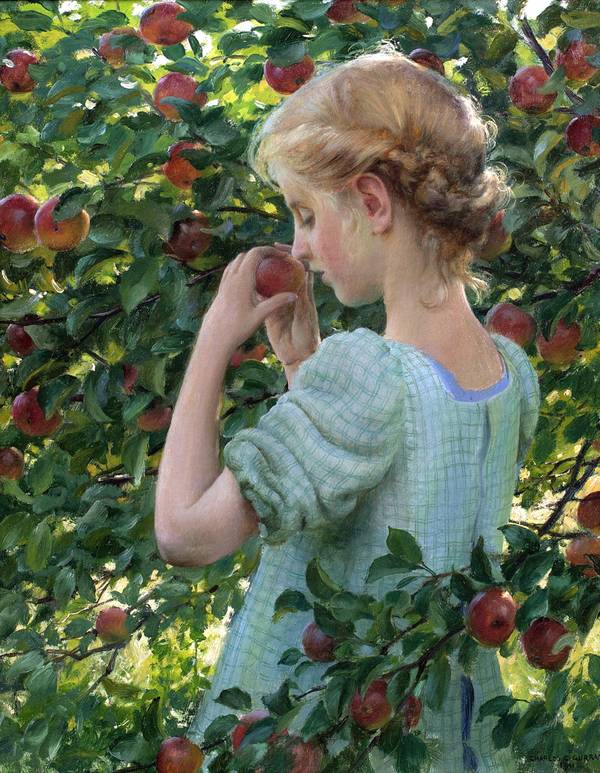