Wolff's relocation to New York City came after early training in St. Louis and travels in Europe, including the Netherlands. A well-known artist in the Midwest and successful exhibitor at the Paris Salons, Wolff was relatively unknown in New York upon his arrival in the early 1910s. However, he exhibited frequently in New York and maintained a painting style that incorporated influence from the burgeoning urban realist movement while remaining loyal to the vibrant light effects and animated brushwork of Impressionism. Most importantly, Wolff continued to depict what he loved: the natural beauty that he was able to discover amid his urban life in New York.

In 1913, Wolff had a solo exhibition in New York at the Yorkville Library, located on 79th Street. It was through the German Association for Culture. He would continue to exhibit with the Two-By-Four Society through 1914 and was also included in a Special Exhibition of Missouri Painters Arranged for the Delegates of the Senate Federation of Women's Clubs in 1919. While he lived well into the 1930s, the art world was beginning to change with advent of modernism in the early nineteen-teens. Gustave Wolff's paintings of tonal winter sunsets, docks along Manhattan's East River, cityscapes, and pastoral scenes of city parkland, really belong to the previous generation of artists. In spite of this, Wolff remained true to his love: Nature. This led one astute critic to write of him, “Of rather retiring disposition, Mr. Wolf's [sic] best friend, confidant and master is Nature, to whose counsels he listens and whose moods and beauties he interprets with a masterly hand, guided by the heart and mind of the true artist.” 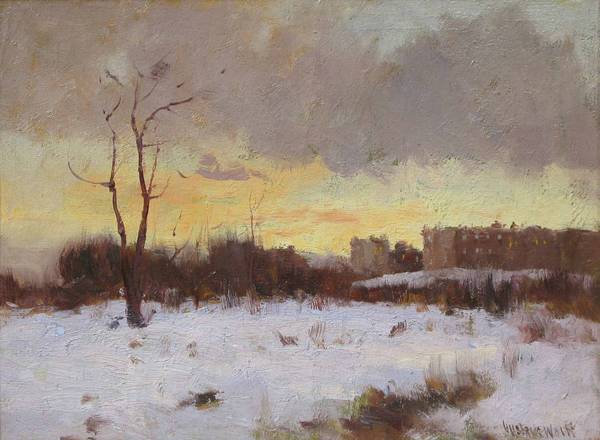