Aside from his study at the Academy Julian in Paris, Barlow is recorded as also studying in national academies in Belgium, the Netherlands, and in New York City. In 1887 Barlow relocated from England to the United States where he became a citizen in 1887. He resided in Providence, Rhode Island, and exhibited his atmospheric and lyrical landscapes of the United States and Cornwall, England at the National Academy of Design and at the Art Institute of Chicago. A scant few of his American paintings, usually identifiable by title and location, are extant. As of 2019, only three works are currently recorded in private collections including a Rhode Island unnamed landscape, Barlow’s large and impressive, America-Evening and a small landscape, North of Providence, Rhode Island on whose stretcher is faintly written, “at Butterfly Pond of the Moshassuck River.” In 1889 Barlow returned to England where he married Marie Elizabeth Johnson, an expatriate American citizen.

In 1892, the couple moved to the Lamorna Valley and the scenic areas near St. Ives, Cornwall, which became late career inspirations to the painter. Soon after his move to St. Ives, Barlow became a member of the Royal Institute of Oil Painters, and the Royal Society of British Artists. Barlow, a prolific painter of popular landscapes and sea views, is now considered a major force in the group known as the St. Ives Society of Artists, handsomely argued in Creating a Splash: The St. Ives Society of Artists by David Tovey, 2004. Barlow died prematurely at the height of his career in the city of Penzance, Cornwall, in 1917, at the age of fifty-six years. 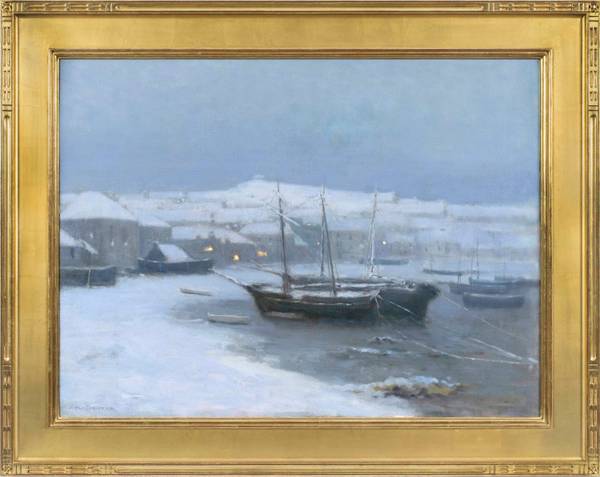